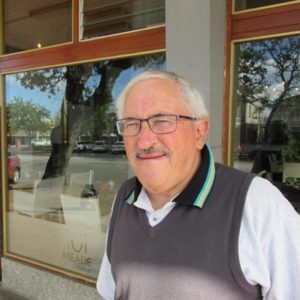 South African athletics and the community of George lost one of their most prominent, respected and well-loved figures with the passing of Abrie de Swardt on Saturday. De Swardt served for more than fifty years as president, vice-president or executive member on various provincial and national bodies of a variety of sport codes.

He was a renowned athletics coach and mentor to many elite athletes. In 2013 he was inducted into the South African Coaches Hall of Fame by the SA Athletics Statisticians (a body he joined as a member in 1972). With his colleague Ian Harries he was the first South African to qualify as an IAAF (now World Athletics) Coaches Lecturer and Course Director in 1994. He received a special award from the International Track and Field Coaches Association in 2004 for his role in the development of coaches worldwide.

De Swardt (70), who studied at the universities of Stellenbosch and the Free State, and lectured in Human Movement Studies at the George campus of the Nelson Mandela Metropolitan University, matriculated at Outeniqua High School in 1967 and obtained his first coaching qualification at age 20.

He represented SWD, Western Province and Free State as a middle distance and cross-country athlete. Among the other tertiary institutions where he worked are the University of the Free State, Goudstad Teachers College, Wits Technikon and Port Elizabeth Technikon. He returned to George in 1992.

During 1983-84 he was full-time national coach/organiser of the SA Amateur Athletics Union (now ASA) and served as national coordinating coach for middle and long distances in 1982-93. He was involved with several SA Olympic teams as coach.

De Swardt also made his mark as administrator in various roles, and was President of Athletics SWD.

De Swardt was a well-known community leader in George and also Chairman of the Southern Cape branch of the Genealogical Society of SA. On Saturday he participated in a canoe marathon organised by the Kwaggatrust of Outeniqua HS when he suffered a heart attack and died shortly afterwards. He was captain of one of the ten teams in the event, of which each had to row 100 km.

Hugo Redelinghuys, Sports Editor of the George Herald, described De Swardt as “sincere and loved and [he] was always a gentleman in his personal relationships. He was one of  South Africa’s athletics giants.” On Facebook a friend said: “Another living sports library has closed.” Christo Vorster, Principal of Outeniqua HS, described him as “one of the most loyal ex-Kwaggas. We have lost a leading figure [groot gees].”

This writer knew De Swardt for more than four decades; we became friends through our mutual love for athletics, especially statistics. Whenever we met, at national championships, other meetings, and also at the Outeniqua Half Marathon in Wilderness, his generosity of spirit, sincerity, humility, and absolute commitment to and immense knowledge of athletics stood out. He was truly a lifelong servant of the sport.

De Swardt, who was born on 29 September 1949, leaves his wife, Sharon, and two sons, Abrie and Martin.

November 8, 2019
0 Comments
Mire Reinstorf, led the way with two ASA National titles in 2019. She won the 2019 Twizza ASA U18 pole vault title with 3.60m in Paarl. At the Sizwe 3Sixty ASA Senior Championships, she also won the senior gold medal and improved her height to 3.80m. At the end of the 2019 season that height